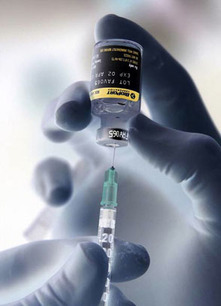 Are Vaccines Safe or Effective?
We are faced with so much information nowadays that it is difficult to choose wisely for our children and ourselves as to what is always in our best interest. To vaccinate or not to vaccinate? Maybe some are effective while others have less of a track record of effectiveness? Some vaccines present safety issues right from the start. Then the question of whether or not we should be giving the sheer number of vaccines at such an early age that we are giving comes into question?

In order to be fair this page will have documentation that has both data that supports and is against vaccines of a variety of kinds. At this point in time we cannot advise the use of vaccinations due to the suggestive evidence that is currently on public record. What we have here is a lot of unanswered questions and safety concerns regarding all of the vaccines. This is to call into question both the safety and effectiveness of these instruments of modern health care.

What comes of a society that accepts foreign 'proven toxic' substances to be injected into their youth?

A profoundly irresponsible social experiment that degrades the immunity of our future!

The observed relative toxicity indices (human neuroblastoma cells/bacterial cells) were: 2-phenoxyethanol (4.6-fold) < phenol (12.2-fold) < Thimerosal (>330-fold). In addition, for the compounds tested, except for 2- phenoxyethanol, the concentrations necessary to induce significant killing of bacterial cells were significantly higher than those routinely present in US-licensed vaccine/biological preparations. These investigators concluded, “(f)uture formulations of US[-]licensed vaccines/biologics should be produced in aseptic manufacturing plants as single dose preparations, eliminating the need for preservatives
and an unnecessary risk to patients.”
~~~~~~~~~~~~~~~~~~~~~~~~~~~~~~~~~~~~~~~~~~~~~~~~~~~
A document supporting the safety claims of some of the vaccines and some suggestive evidence indicating there is no link between autism and specific vaccines. A question to ask when reading all of these documents are who funded the research? Research is one of the most manipulative models to alter an industry in favor or against something to support a select few corporate interests.
Below is an article written by the CDC in 2010 detailing the ingredients contained within some of the leading vaccines on the market today with the reasoning for the ingredients and which vaccines contain which.
Must-See Videos:
Are these ingredients safe?
(DISCLAIMER: Keep in mind that there are different forms of each of these ingredients and delivery (ingestion, intra-muscular, inhalation, etc.) all have different effects. Just because studies that show aluminum hydroxide is poisonous via ingestion doesn't mean it's as poisonous as intramuscular injection or vice versa? We do not know all the reactions. We just know there are a lot of documents you all should be aware exist and abstracts that raise concern!

Brilliant Green: Common excipient that acts as a dye in the following vaccines Vaccinia (Dryvax-historic)

Squalene, MF59: Common component that acts as a immune-stimulater in the following vaccines influenza vaccine (FLUAD, Chiron), other sources unknown?

"My suspicion, which is shared by others in my profession, is that the nearly 10,000 SIDS deaths that occur in the United States each year are related to one or more of the vaccines that are routinely given children. The pertussis vaccine is the most likely villain, but it could also be one or more of the others."
Dr. Mendelsohn, M.D.

"The evidence for indicting immunisations for SIDS is circumstantial, but compelling. However, the keepers of the keys to medical-research funds are not interested in researching this very important lead to the cause of an ongoing, and possibly preventable, tragedy. Anything that implies that immunisations are not the greatest medical advance in the history of public health is ignored or ridiculed. Can you imagine the economic and political import of discovering that immunisations are killing thousands of babies?"
Dr. Douglass M.D.

"Only after realising that routine immunisations were dangerous did I achieve a substantial drop in infant death rates. The worst vaccine of all is the whooping cough vaccine... it is responsible for a lot of deaths and for a lot of infants suffering irreversible brain damage. In susceptible infants, it knocks their immune systems about, leading to irreparable brain damage, or severe attacks or even deaths from diseases like pneumonia or gastro-enteritis and so on."
Dr. Kalokerinos, M.D.

"Delay of DPT immunisation until 2 years of age in Japan has resulted in a dramatic decline in adverse side effects. In the period of 1970-1974, when DPT vaccination was begun at 3 to 5 months of age, the Japanese national compensation system paid out claims for 57 permanent severe damage vaccine cases, and 37 deaths. During the ensuing six year period 1975-1980, when DPT injections were delayed to 24 months of age, severe reactions from the vaccine were reduced to a total of eight with three deaths. This represents an 85 to 90 percent reduction in severe cases of damage and death."
Dr. Raymond Obomsawin, M.D.

"Autism may be a disorder linked to the disruption of the G-alpha protein, affecting retinoid receptors in the brain. A study of sixty autistic children suggests that autism may be caused by inserting a G-alpha protein defect, the pertussis toxin found in the D.P.T. vaccine, into genetically at-risk children."
Dr. Mary N. Megson, M.D.

"This report describes six mothers who received live virus vaccines and one who received a Hepatitis B vaccine during pregnancy after having received an MMR booster five months prior to conception. All the children who resulted from these pregnancies have had developmental problems, six out seven (85%) were diagnosed with autism, and the seventh seems to exhibit symptoms often associated with autistic spectrum disorders."
Dr. F. EdwardYazbak, M.D.

"This..forced me to look into the question of vaccination further, and the further I looked the more shocked I became. I found that the whole vaccine business was indeed a gigantic hoax. Most doctors are convinced that they are useful, but if you look at the proper statistics and study the instances of these diseases you will realise that this is not so . . . My final conclusion after forty years or more in this business [medicine] is that the unofficial policy of the World Health Organisation and the unofficial policy of the 'Save the Children's Fund' and ... [other vaccine promoting] organisations is one of murder and genocide. . . . I cannot see any other possible explanation. . . . You cannot immunise sick children, malnourished children, and expect to get away with it. You'll kill far more children than would have died from natural infection."
Dr. Kalokerinos M.D.

"The medical authorities keep lying. Vaccination has been a disaster on the immune system. It actually causes a lot of illnesses. We are changing our genetic code through vaccination."
Dr. Guylaine Lanctot M.D.

"Either you run the day or the day runs you."

All contents except quotations © 2009-2015 Body Epiphanies Massage & Nutrition
33-Page Wellness Primer | Chaparral Detox Bath | 45-Page GI-Map White Paper | Bioenergetics Nutritional Poster
Affiliate Disclosure: There are affiliate links throughout our educational material, website and e-mails.
​
If you resonate with all of these free resources, you're invited to effortlessly support us through the links ^_^.