Is Chemo & Radiation The Best Option? 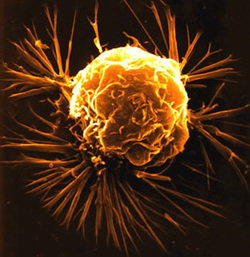 Electron micrograph of a single breast cancer cell.
The most controversial issue in health-care today. We are determined to provide you with the most scientific research there is regarding cancer treatment effectiveness & safety. While we are not qualified to diagnose or treat cancer we will bring you the latest research regarding cancer treatments so you can make the decision that is right for you. What you are about to read can alter the course of your life from here forward. We recommend you share this page with as many people as you can. Much of the research here is done by Oncologists, Physicians and Scientists.

Cancer is considered a death sentence by many. Yet how much do we really know about cancer? What lies below will detail the therapies used today and why we feel they need to cease the treatments and begin practicing other modalities that are proven far more effective & safe!

If the concerns outweigh the benefits than we ought to rethink our position.
NEW potential treatment for brain and lung cancer

“The right thing to do never requires any subterfuge, it is always simple and direct.”

We don't disagree that chemo or radiation kills cancer. What we want others to be aware of is it often kills you too.

We are here to shine light on the science behind all of it. Integrative, alternative and even fringe therapies.

Results: The overall contributions of curative and adjuvant cytotoxic chemotherapy in 5-year survival was estimated to be 2.3% in Australia and 2.1% in the USA.
Morgan, G. et al. (2004). Clinical Oncology 16, 549e560

Dr. Leigh Erin Connealy, M.D., M.P.H.
Keynotes of Dr. Leigh's Approach (NOT a complete list): Seek consultation before following recommendations this is for educational puposes only

Dr. Francisco Contreras, M.D. (Integrated Regulatory Therapy Hospital in Mexico)
Keynotes of Dr. Francisco's Approach (NOT a complete list): Seek consultation before following recommendations this is for educational puposes only

Carboplatin (containing) Chemotherapy: Trade names Paraplatin and Paraplatin-AQ is a chemotherapy drug used against some forms of cancer (mainly ovarian carcinoma, lung, head and neck cancers). It was introduced in the late 1980s and has since gained popularity in clinical treatment due to its vastly reduced side-effects compared to its parent compound cisplatin. Cisplatin and carboplatin, as well as oxaliplatin, interact with DNA, akin to the mechanism of alkylating agents.